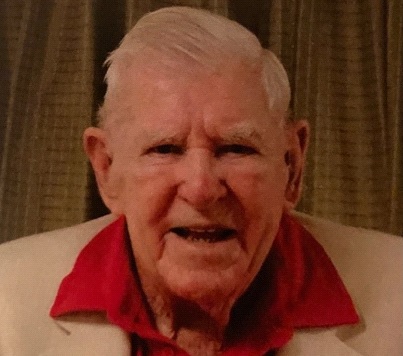 Obituary of John B. Morris, Jr.

John Morris was born on July 14, 1916 in Trenton, New Jersey, to May (Miller) and John B. Morris, Sr. He died peacefully at the age of 102, well-fortified by the sacraments, on Saturday, January 19, 2019, following a recent decline related to a spinal compression fracture. Our entire family extends heart-felt thanks to the hospice caregivers at Suncoast Hospice, whose dedicated care and attention provided John with relief from the excruciating back pain he suffered with an abundance of grace and compassion.

As a young man, John moved with his family from New Jersey to Florida, and he worked with the Works Progress Administration’s Civilian Conservation Corps.  Later, John apprenticed as a plumber, and operated his own plumbing company for many years.  As a side-line, he also worked for many years at the local greyhound racetrack, where he met his wife, Virginia.  In retirement years, John and Virginia enjoyed living in Treasure Island, Florida, during the winter months, and spending summers with Virginia’s mother and brother, Muriel and Carl Dirkes, at the family cottage on Mullett Lake in Indian River, Michigan.  John and Carl collaborated on many a project at the cottage, including an addition that allowed year-round enjoyment of the view of the lake and the call of the loons.  There was no project that John would not tackle, and he could repair anything—not just plumbing.  The blessing of a robust constitution allowed John to climb ladders and execute roof repairs and gutter-cleaning into his mid-90s, and he drove a car even after celebrating his 100th birthday.  An avid reader, John especially enjoyed reading westerns and at least two newspapers a day.

John’s life will be celebrated at a Mass of Christian Burial at 10:00 am Monday, January 28, 2019, at Blessed Sacrament Church, 11565 66th Avenue North, Seminole, FL 33772. The family will receive friends at 9:30 am at the church. In lieu of flowers, remembrances may be offered to the church that John so enjoyed, and where he and Virginia worshiped during the summers in Michigan:  Cross in the Woods Catholic Church and National Shrine, 7078 M-68, Indian River, Michigan, 49749.

Funeral Information may be viewed and condolences may be offered at https://reesefuneral.com

To send flowers to the family or plant a tree in memory of John Morris, Jr. , please visit Tribute Store
Monday
28
January