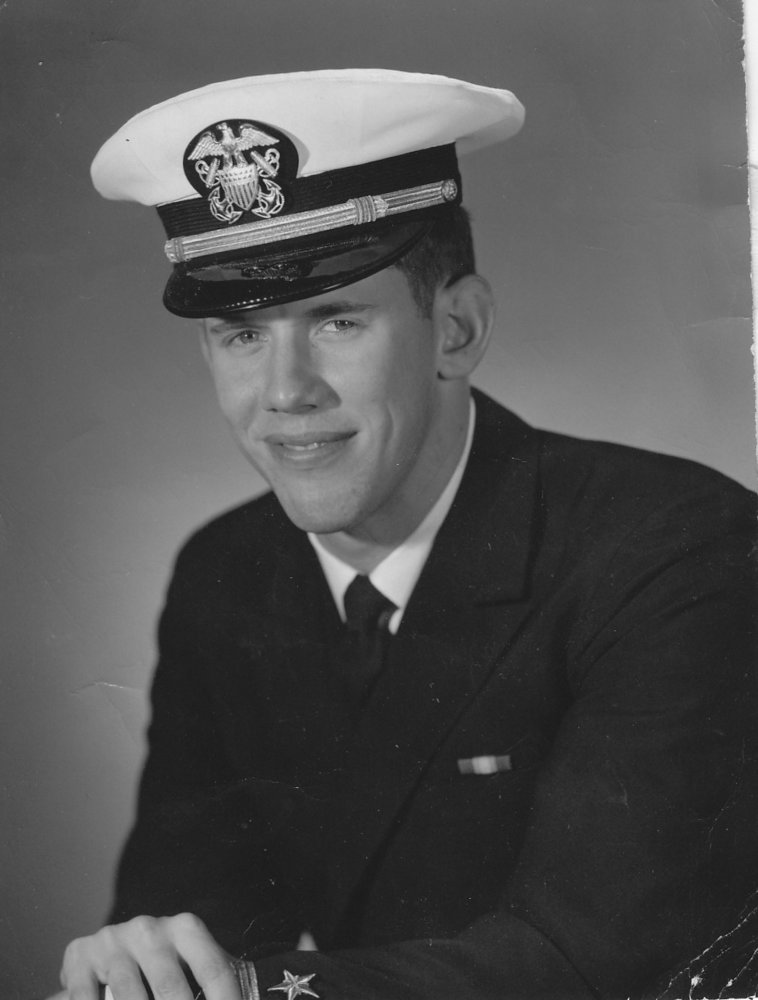 He was the husband of the late Nadine, beloved father of Trent (Jen) of Chicago and Nathan of St. Petersburg, Fla., and the loving grandfather of Skylar, Frank and Harrison. Ernest was the brother of Regis (Kathleen), Rita Shoemaker (Oliver), Mary (Bill Kelleher) and the late Paul J.

Ernest went to high school at St. Wendelin in South Hills of Pittsburgh, graduating in 1961.  From there he attended Duquesne University graduating with a degree in Chemistry in 1966.  After college Ernest joined the Navy and was enrolled in Officer Candidate School to be an officer at sea.  Ernie was the engineering officer on the USS Fortify and the USS Sheboygan County, both 100+ wooden ships commissioned as mine sweepers, during his service in the Navy.

Ernie was very proud of his service in the Navy as a line officer on a “ship at sea” and regaled many a friend and acquaintance, and sometimes a few strangers, with his stories of sailing across the Pacific or through the Panama Canal or into the port of Hong Kong.  Of course, the stories that did not get told as often were those that occurred during his service off the coast of Vietnam and in the Mekong Delta.

His Navy career took him from Pittsburgh to California to Vietnam, the Philippines, Hong Kong, Hawaii, Panama, Charleston, SC and finally Norfolk, VA.  It was in Charleston prior to Vietnam that Ernie meet Nadine, or as he called her, Wink (although to this day it is still unclear the origins of this nickname).  They would meet at a party in Charleston and begin a relationship that lasted nearly 50 years.

After the Navy, Ernie and Wink returned to Western PA, where Ernie began his professional career with Rockwell International.  Living in tiny towns like Smethport and Bradford PA in the northeastern part of the state, he and Wink had a son, Trent, in 1972.  After a move to Painesville, Ohio, they were blessed with another son, Nathan, born in Ashtabula County in 1975.

From Ohio, Ernie and his family of four moved back to Pittsburgh where he began his 25 year career with PPG Industries as a chemist and later a salesman and plant manager.  PPG took him and his family many places, in 1984 they moved to Cleveland, Ohio where his two children graduated from Rocky River High School.  In the mid-1990s, his job transferred him to England where he and Wink lived in Birmingham for over three years.  Returning stateside in 1997, Ernie finished his PPG career in Greensboro, North Carolina, where he and Wink built a house and while Nate finished college at UNC Greensboro.

Ernest retired from PPG in the early 2000s and moved with Wink to retirement in Sunny Florida, residing in the St. Petersburg area, close to where Wink grew up.  Always active in retirement, Ernie worked as a salesman for a company that sold healthcare equipment to families and facilities helping the disabled live free and independent lives.  This was only natural as Ernie, diagnosed in the early 1980s with a neurological condition that took away his ability to use his legs, had been living independently with a disability for over 25 years by the time he started selling wheel chairs and ramps and hand controls for vehicles for Guldman in 2005.

Ernie had many passions and lived life on his terms despite his physical limitations.  He is mourned by his two sons, three grandkids, three surviving siblings, and a myriad of friends he made all over the world.

Never downbeat, always looking forward, and quick with a joke or story, Ernest William Niederberger will be dearly missed!

Due to the current COVID-19 restrictions on travel, the family will not be having a public service for their father until travel is not restricted, and non-essential businesses are no longer closed.  It is the family’s wish that a service to celebrate Ernie’s life can be arranged soon.  Details will follow as they become available.

With regard to charity, please advise that the family asks that condolences be limited to donations in Ernie’s name to Fisher House – Helping Military Families

To send flowers to the family or plant a tree in memory of Ernest Niederberger, please visit Tribute Store
Monday
29
June

Share Your Memory of
Ernest
Upload Your Memory View All Memories
Be the first to upload a memory!
Share A Memory
Send Flowers