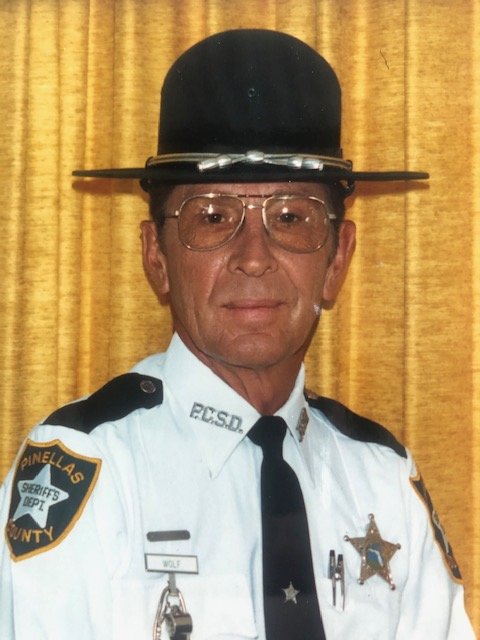 Gene “Geno” Wolf, 88, passed away in hospice care on May 18th in Pinellas County, Florida where he had lived for over 48 years. Gene was born July 25, 1931 in Lancaster County, Pennsylvania to Warren and Francis Wolf. He proudly served in the Marine Corps from 1948 to 1952 and earned the rank of E5 Sergeant as a Small Arms Weapons instructor at Camp Pendleton in California. This time of service was a great source of pride all his life. After a brief time working as an automobile mechanic, he began a life-long career in law enforcement, starting with the Ephrata Borough Police Department in Ephrata, Pennsylvania, where he reached the rank of Detective Sergeant. After moving with his family to Redington Shores, Florida in 1972, Gene was hired on to the Pinellas County Sheriff’s department where he worked as a Crime Scene Investigator for many years and retired in 1987 in the Civil Division. Gene was also a great musician and played the bass for a group called the Royalaires, who participated in a USO tour in 1963. After his retirement, he spent a lot of time fishing and woodworking until he was no longer able to do so.

In February of this year Donna, his beloved wife of over 40 years, preceded him in death. He is survived by his sister Annette and her husband Hal Heinerdeer and many nieces and nephews. His surviving children include daughter Debby and her husband Maynard Smith, sons Larry, Steve and Bruce, and his daughter Dorrene Cook. Surviving grandchildren include David, Larry, Angel, Jeremy, Bryan and Jackie and 6 great-grandchildren. He also had a large extended family with his wife Donna.

Due to the COVID-19 situation, memorial services will be held at a yet to be determined date. If you would like to be notified of that information once it is secured, please indicate such on the Memory Book for Reese Funeral Home. In lieu of flowers, please make memorial donations to your charity of choice.

To send flowers to the family or plant a tree in memory of Gene Wolf , please visit Tribute Store

Share Your Memory of
Gene
Upload Your Memory View All Memories
Be the first to upload a memory!
Share A Memory
Send Flowers