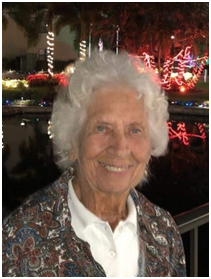 Our family is saddened to announce the passing of Sophia Marie Burnett (nee Rogala), 92, of Seminole, Florida on Tuesday, September 1, 2020. Sophia was born in Lorain on May 20, 1928.

She graduated from Lorain H.S. on June 5, 1946 and married Warren Burnett January 22, 1949. She retired from the Ohio Bureau of Employment Services, Elyria, Ohio after 20 years of service.  They lived in Ohio before relocating to Florida in 1980.

Sophia was a multi-talented, artistic soul who learned and perfected many crafts and hobbies including sewing, ceramics, painting, needlework, macramé and crocheting.  Golfing by far became her favorite activity. She received many awards including several for Holes-In-One!

She is survived by her children: Kathleen and Thomas; grandchildren: Julie, Lisa, Jacob, Lucas  and Katie; great-grandchildren: Reina and Maya, sister: Jennie Rachul, and many nieces and nephews.

Sophia's parents; two sisters; three brothers and a grandson preceded her in death as well as her husband of 63 years who passed in 2012.

A graveside service will be conducted at 9:30 a.m., Monday, September 21, 2020 at Bay Pines National Cemetery, 10000 Bay Pines Blvd., Saint Petersburg, FL 33708 (exact location: Cremation Above Ground Columbarium A). After the service, we will host a Celebration of Life for our "Super Nana" at the home of her daughter.

In lieu of flowers, the family is requesting that donations be made to the USF Health Byrd Alzheimer's Institute (https://health.usf.edu/medicine/byrd/donate).

To send flowers to the family or plant a tree in memory of Sophia Burnett, please visit Tribute Store
Monday
21
September

Share Your Memory of
Sophia
Upload Your Memory View All Memories
Be the first to upload a memory!
Share A Memory
Send Flowers