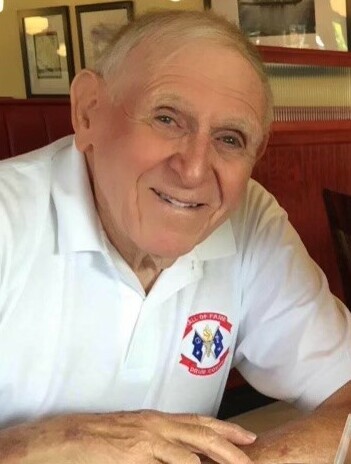 Ken was born April 2, 1931 in Penn Yan, the son of Marius and Mary Petersen. He began playing trumpet at age 9 and by 1947 had started his Drum Corps career.

He became corps director and brass instructor for various corps in Western New York and also established a reputation for teaching teens and young adults music and life lessons, helping them succeed when they previously were struggling.

In 1991, at the age of 60 Ken returned to marching competition with Rochester’s Empire Statesmen, helping them win their first of several World Championships. In the 2000s he helped win another World Championship with the Ghost Rider mini-corps. He also joined The Mighty St. Joe’s Alumni Corps and played exhibitions until the age of 86, finally retiring after a 70-year career.

He was predeceased by his wife of 64 years Phyllis Petersen, son Dane, his parents, brothers-in-law Howard Pedersen and Thomas Ferraro, and numerous aunts, uncles, cousins and friends.

Friends and family may call on March 5, 2022 10AM-Noon at St. Paul’s Lutheran Church in Penn Yan, NY with a funeral service to follow at the church.

In lieu of flowers, the family requests you consider a contribution in Ken’s honor to Yates County Humane Society, PO Box 12, Penn Yan, NY 14527, or via www.yateshumane.org.

Share Your Memory of
Kenneth
Upload Your Memory View All Memories
Be the first to upload a memory!
Share A Memory