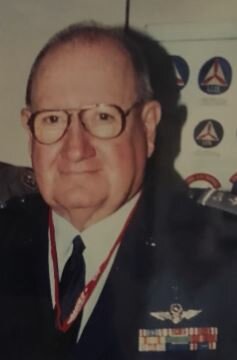 William Bedford Cass, 87, of Seminole passed away on May 13, 2022. Born on June 13, 1934 in Evanston, Illinois, and raised by his parents, Robert Bentley Cass and Helene Cass, in Waterloo, Iowa, Bill is survived by his wife Ann, his daughter Elizabeth Ehrenberger, his grandson Michael and his great-granddaughter Lydia. Bill also leaves behind his stepsons, Rory and Matthew O’Kane, his grand-stepchildren Jessica, Regan, Kevin and Brennan and his great-step grandson Malachi.

Bill graduated from the University of Iowa with a Bachelor of Arts in History. He was a proud member of Delta Upsilon. After college, he moved to Cedar Rapids, Iowa. He was the owner and President of Cedar Rapids Transfer and Storage. Bill coached tennis at Coe College. After selling his business, he moved to Florida. Bill served 29 years in the U.S. Civil Air Patrol (C.A.P.) achieving the rank of Brigadier General in 1984. During his tenure at CAP, Bill oversaw over 60,000 volunteers, and assisted in the development of the Drug Interdiction Program for the State of Florida. He was an avid photographer, history buff and loved cars. He was fond of reminding us that in heaven there is no beer - that’s why we drink it here. He will be missed by many.

To send flowers to the family or plant a tree in memory of William Cass, please visit Tribute Store

Share Your Memory of
William
Upload Your Memory View All Memories
Be the first to upload a memory!
Share A Memory
Send Flowers