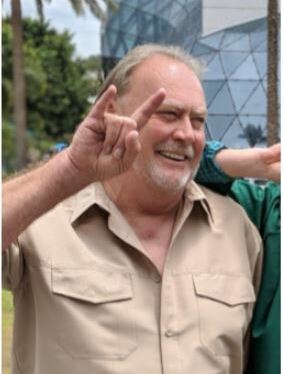 James S. Lewis “Jimbo” 64, of Seminole, passed away November 20, 2021, at Largo Medical Center. He was preceded in death by his parents Joan and James Lewis. He is survived by his son Tyler, brother Jeffery, sister in-law Terry, and nephews & nieces Joey, Meghan, Megan, and Dacoda. Born and raised in Port Huron, Michigan. Jimbo grew up loving the great outdoors, Hunting, Fishing, and mostly Skiing. He was a local ski patrol for many ski lodges in the area. He also enjoyed snowmobiling, motocross, and playing hockey. He graduated from Port Huron Northern High School. Then attended St. Clair County Community College and several well-known Art Schools. In Michigan, he worked for Bechtel Construction as a powerplant foreman for many years.

After living between both Florida’s east coast and Michigan for some time, Jimbo made the decision to move to Florida for good in the 1980s. He moved to Pinellas to help his mother Joan who owned The Hole-In-The-Wall Bar in Reddington Shores. During this time, Jimbo was beginning his Sign and Art career with a simple paintbox out of his truck. He hand-painted many murals, and business windows, including the locally famous lady Silhouette on Treasure Island’s Satellite Hotel.

Jimbo was a very creative individual. In 1991, he began his own business, Southern Image Inc. A sign business that has helped many people across the bay area, and the Pinellas beaches. He was a very resourceful person and could always be counted on in both his business and personal life. His artistic talent and creativity have brought joy to many of those who had the pleasure of working with him over the past 30 years. Including recently, the iconic World Liquors sign, which was refurbished for Ferg’s Sport Bar in St. Petersburg.

Jimbo will be remembered in so many ways by those who he’s connected with in his life. After a nearly five-year battle with colorectal cancer, he’s shown us just how strong and effervescent he always was. His Celebration of Life will be held on Saturday, January 15, 2022, from 1pm – 3pm at the Madeira Beach City Centre, Boca View Hall. In Lieu of flowers, memorial donations may be made to Fight Colorectal Cancer (Fight CRC) at https://fightcolorectalcancer.org/.

To send flowers to the family or plant a tree in memory of James Lewis, please visit Tribute Store

Share Your Memory of
James
Upload Your Memory View All Memories
Be the first to upload a memory!
Share A Memory
Send Flowers